Goosebumps. I get them every time the keyboards give way to the harmonica in the iconic intro of "Take the Long Way Home" by Supertramp.

The harmonica continues to weave in and out as the pondering lyrics causes your mind to wander. As the melody meanders, it sweeps you along for a unplanned ride through your own life. The sax and harmonica solos in the middle are a highlight.

I was at Bruce Jordan's 10th birthday party when I first remember hearing the Breakfast in America album. Still love all of the singles and the "Goodbye Toby" parody on The Office was cute.

"Take the Long Way Home" will forever be one of my favourite driving songs, best experienced when you have a little extra time to take the scenic route.


"Message in a Bottle" – The Police

"Walking on the Moon" – The Police

"What a Fool Believes" – Doobie Brothers

Email ThisBlogThis!Share to TwitterShare to FacebookShare to Pinterest
Labels: 1979, Supertramp

For many of us, this song was a kooky introduction to the fascinating world of marine biology and cowbell percussion. For some of us, this early new wave anthem was also an initiation to a social activity called slam dancing that used to fill the floor with tomfoolery at the Banook Canoe Club in Dartmouth.

From the opening guitar and synth riffs, "Rock Lobster" by The B-52s is both catchy and menacing.

The lyrics are silly and fun, sometimes hysterical, always ridiculous: "There they saw a rock. It wasn't a rock. It was a Rock Lobster."

While the frenetic guitar riff is a throwback to surfer rock, the track turns on its head halfway in to pure chaos, becoming almost punk.

When the dust settles, "Rock Lobster" may have been that magic point in time where the rawness of punk collided with the innovation of new wave. Regardless, this is a polarizing track, one you either adore or despise.

Email ThisBlogThis!Share to TwitterShare to FacebookShare to Pinterest
Labels: 1978, The B-52s

"Heeeeeyyyyyy, it will come back to you".

That was the lyric I grew up singing to myself.

Years later, I found out I'd been wrong. Despite this gaffe, the jazz and funk fusion of "Peg" by Steely Dan remains one of the catchiest tunes ever conceived.

The track sounds like an ode to 70s music. There's a funky bass. Guitar solos weave in and out. And the ubiquitous Michael McDonald sings backup vocals, always a treat.

The cynical lyrics aside, this one's been always about the music. That infectious groove.

1976 was probably the first year I really started paying attention to music on the radio. Ever since I first heard this as a 7-year-old in the back of my parents' station wagon, I've adored this song with the cryptic title.

It's a poem. It's a movie. It's the sound of nostalgia. The vocals are almost narrated and delivered with elegance. And the music, the magical music flows.  "Year of the Cat" by Al Stewart is one of the most moving singles ever released. It gives me all the feels.

I've never been a big fan of love songs. At least not the sappy, cliché-riddled ones, those which inevitably included the word 'love' in the title.

The lyrics paint a few literal images, notably the epic "She comes out of the sun in a silk dress running like a watercolor in the rain", but mostly the story being told has an elusive feel to it...

Clocking in at over six minutes it may seem long, but I've always found it's over far too soon. That's the sign of a great tune, so much that this classic easily falls in my top 10 of all time.

Al Stewart compares songwriting to cinema: "I want to show you a movie when I’m playing a song." Here's to us all to finding that hidden door in the blue-tiled walls of a market stall.


"You Should Be Dancing" - Bee Gees
Frantic dance floor filler with great bass and guitar.

"The Wreck of the Edmund Fitzgerald" – Gordon Lightfoot
An eloquent delivery of a tragic story.
Posted by LP at 6:53 PM 1 comment:

Sometimes the most popular songs are also the best ones. "SOS" by ABBA is pure, unadulterated ear candy.

A twirling synth replaces the mournful piano in the verses before getting swept aside by an euphoric runaway chorus. A big, fat chorus highlighted by uplifting harmonies and shimmering acoustic guitar.

"SOS" is also one of the most dramatic examples of the 'sad verse, happy chorus' formula perfected by alternative artists in the 1980s. Musically, it's a pop masterpiece.

"Rhinestone Cowboy" – Glen Campbell
One of the few country tunes I ever liked.

Email ThisBlogThis!Share to TwitterShare to FacebookShare to Pinterest
Labels: 1975, Abba

In the mid-70s Dad would play vinyl from the Eagles, Bob Seger and Gordon Lightfoot on the hi-fi during stormy Saturday afternoons before Hockey Night in Canada. I wasn't buying music yet and had no choice but to enjoy or endure what my parents served up. This is a rare example of one of Dad's favourites that also became one of mine.

While the melody in "Sundown" is so bright and catchy, the contrasting ominous lyrics wonder whether his partner has been cheating. The chorus is especially hypnotic, and the highlight when the harmony kicks in. Great sparing use of electric guitar.

The tune can be equally enjoyed playing in the background or cranked.


"Dreamer" – Supertramp
Layers of organ and swirling guitar puts you in trance.

In the early 80s, I spent my allowance on the essentials of the era: arcade video games and K-Tel compilation records. The latter were ideal for exploring a diverse range of music genres, from classic rock to new wave, even country. One such disk was Pure Rock, a tribute to the 70s. The lead track "Dust In the Wind" by Kansas and Cheap Trick's "Dream Police" were once fave tunes. But it's that side one second song, a poignant power ballad, that stuck out then, and stays with me now.

Little did I realize that "Dream On" was Aerosmith's debut single.

Those simple yet profound lyrics make "Dream On" by Aerosmith an eternal classic. 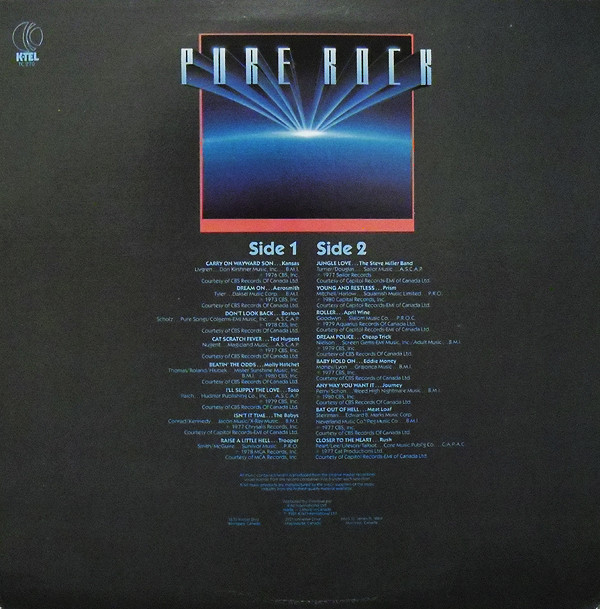 Email ThisBlogThis!Share to TwitterShare to FacebookShare to Pinterest
Labels: 1973, Aerosmith

The clavinet grabs you right out of the gate and never lets go. Add in some funky bass. Then the horn section kicks in.

This pop-funk-soul groove summons you the dance floor, standing isn't an option. If it doesn't fill the floor at your watering hole, then you may want to leave. "Superstition" is often enjoyed in a loop binge.

"Do It Again" – Steely Dan
Addictive song about a myriad of addictions with a slick jazzy melody and latin rhythm.

"Horse With No Name" – America
Classic folk-rock jam about "plants and birds and rocks and things"
Posted by LP at 6:41 PM 1 comment:

It was in 2005 when I first heard "One of These Things First" by Nick Drake, a British folk artist totally unbeknownst to me. Buried on the Garden State soundtrack from the 2004 film, this track is one of those wonderful gems you sometimes stumble upon.

The longing lyrics paint a sad "could of, should of, would of" anthem while the mellow vocals, running piano and acoustic guitar weave together to create an exquisite arrangement of uplifting folk jazz. I can envision the whimsical music appearing on a Charlie Brown special.

Too bad that Nick Drake's apparent reluctance to perform live or be interviewed contributed to his lack of commercial success.


"Country Roads" – John Denver
That unforgettable chorus is burned inside ourselves for eternity.

"Get It On (Bang a Gong)" – T. Rex
It slinks and swaggers, a glam rock groove with an infectious hook.

"Riders on the Storm" – The Doors
Pure atmosphere, the echoing guitar, that psychedelic melody.
Posted by LP at 6:38 PM 1 comment:


Sure this song is overplayed. Forever a staple on set lists played by bar bands throughout North America, it's also immortalized on that TV commercial peddling Wrigley's gum.

Still, I never tire of hearing it. You don't turn this song off, you turn it UP.

In one word? CLASSIC. There's something magical and reassuring about that guitar riff.

And this sort of desert isle list just has to have at least one classic rock anthem.

In fact, I'll posit that "All Right Now" may actually be THE original 'classic rock' tune before the genre of classic rock was even established. Discuss.

"Cecilia" – Simon & Garfunkel
Must be embraced - played everywhere, enjoyed by all
Posted by LP at 6:11 PM 1 comment:

Email ThisBlogThis!Share to TwitterShare to FacebookShare to Pinterest
Labels: 1970, Free


1969 = "Space Oddity" - David Bowie.
These first few years will be the hardest ones since I don't have any actual memories of enjoying them when they were released. But thanks to the magic of the internets, I have access to a treasure trove of lists and videos. In an era highlighted by the Stones, Beatles and Led Zep, here we have fledgling folk artist David Bowie spacing out about outer space.

Fave lyric: "For here, am I sitting in a tin can".

The dreamy atmosphere, irresistible melody and inspired vocals make this one a long-time keeper ever since I first stumbled upon the video during the early 90s on MuchMusic (remember when the station played music?). The video was shown as a segue to an episode of Mike & Mike's Excellent X-Canada Adventures about Cavendish, PEI, leading into a story about the juxtaposition of Anne of Green Gables and some of the newer commercial attractions of the day. Like a space shuttle replica...

Back to Bowie..."Space Oddity" helped inspire Peter Schilling to write a sort of sequel in this 1983 new wave hit featuring the Major Tom character. At the time who could have ever imagined the legions of artists, musicians and trends later influenced by his work.