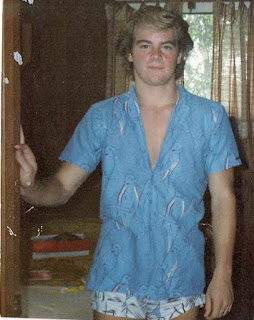 Growing up, I was a voracious music video junkie. Like many teens, I binged on all the video shows.
Starting in junior high during the early 80s, we watched Switchback with Stan the Man and that cool ASN program on Saturday nights, Atlantic Canada's Choice (Thanks, Katrina!). On high school weekdays before supper we turned on CBC's Video Hits with Samantha Taylor, and on weekends, Good Rockin' Tonight hosted by Terry David Mulligan and eventually Stu Jeffries. For the night owl, the U.S.-based Friday Night Videos kept us entertained.
The best and worst part in life before content-on-demand was having to wait then hope your favourite song made the cut.
The weekend programs played a top thirty countdown and typically showed a four or five second clip of the chorus with a graphic display depicting its current chart ranking compared to last week.
Long before discovering Excel spreadsheets, I compiled my own favourite fifty songs of the week in Hilroy scribblers as a response to Huey and the News and Starship topping the charts with mediocre gack.
Motivated partly to correct the egregious countdown 'errors,' these personal charts also represented a small way I could exert a little control and order in my life.
Let's start the journey with my fave 100 songs from the 80s as of now.
I created two 'rules' for some context:
1. Songs must have been released as singles and/or have an official video. No deep tracks; we'll save that for another time.
2. A maximum of 5 songs per artist. Otherwise I would have added 23 New Order songs, ha!.

For each post, I've added a video link for each song, as well as added a few facts, observations and a smattering of personal anecdotes. I hope to make you smile and cringe, but above all enjoy the ride down sentimental street.
My favourite 100 songs from the 80s
Other countdowns on this site:
Favourite song each year since 1969
Top songs each year since 1969
Favourite 100 music videos