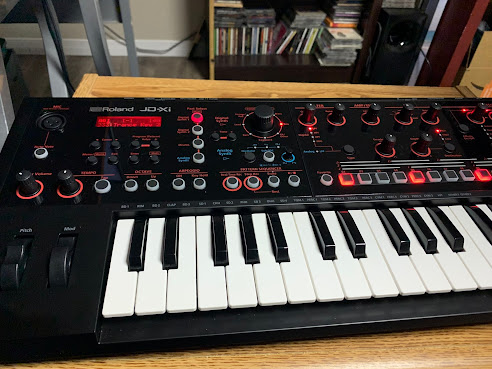 I've been also getting familiar with a DAW, short for Digital Audio Workstation, software used to record and edit tracks from instruments like a synth. I am using Reaper for PC.

Thanks to many handy online videos, I've been learning how to record from my Roland.

It's been baptism by fire, having lost partial or entire files by accident.

Reaper's interface is fairly intuitive, yet sometimes seemingly basic functions, like trimming the end of a track, are hidden deep down in a menu. Fun fact: the undo option is always your friend. 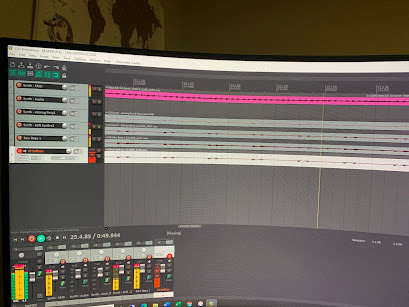 But despite a whole lot of trial and error, I have experienced enough fun and progress to keep on experimenting.

I recently signed up to SoundCloud to share a few demos. Below is my first playlist, which includes a few tracks made with my Casio 7600 during my PEI getaway in September. Give them a spin and let me know what you think. 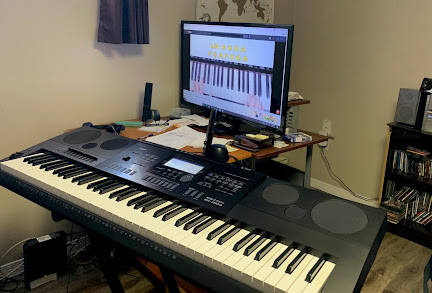 Back in March 2021, to help pass the time during the pandemic, I bought a Casio Workstation 7600 keyboard from Amazon. I love it!!
This isn't my first keyboard. Way back in 1986, my parents gave me a keyboard for Christmas, a decent intro synth with tons of pre-programmed bells and whistles. But I had lacked the discipline to learn, and didn't take any formal music lessons, preferring to tinker around and hack away at the synth lines to "Cry Wolf”. The peak of my musical creativity happened during Mr. Falcone’s English class, when Corey Mock and I hammered out an original song on the keyboard, a ramshackle track called “Shantytown,” which received rave reviews. But soon afterwards, I lent my keyboard to Laird for his new band and never saw it again.
Fast forward to March 2021, some 35 years later.
Since opening up the box, I've played almost every day, even if only for 15 or 20 minutes. Without any formal lessons, I started by playing the synth riffs of some of my favourite 80s songs by following YouTube videos. The first synth riff I learned was the intro to "Thieves Like Us" by New Order, a well-known track from the Pretty In Pink soundtrack. Post-it notes were a huge help during these early days (see video below).
I spent the first few months just jamming synth riffs. Of course it was easier to find You Tube tutorials on the more popular songs. These included:
Then I finally started to experiment with the functionality of the keyboard, exploring the Sequencer and how to create songs by recording tracks (or instruments) as separate layers.
Six months later in September, I carted my keyboard over to an Airbnb in PEI as part of 4-day music retreat. During that time, I wrote lyrics and recorded several original demos. Since then, I have created a few instrumental tracks. The video below is a clip of me warming up by playing a few 80s riffs.
In the near future, I will share some of these creations with you. Who knows, I may be able to churn out an album in 2022 to go with my forthcoming book.
Posted by Peach on a beach at 8:44 PM No comments: 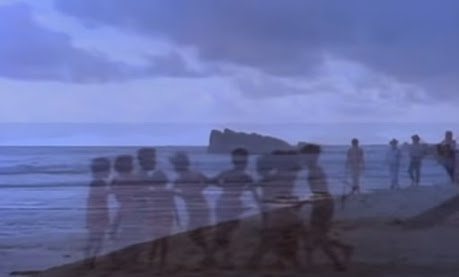 With already a couple of catchy singles and epic videos under its belt, Duran Duran went on to top those with the sweeping ballad "Save a Prayer".

The dreamy synths immediately draw me in before the flute takes over.

Filmed among the pristine beaches and the ruins of Buddhist temples of Sri Lanka, the surreal video flows perfectly to the synth-pop gospel. Dancing children, crashing waves and five buddies on a trip.
But it wasn't all sunsets and one-night stands.
During the elephant clips, the intoxicated guitarist Andy Taylor apparently fell into water used as an animal latrine and ended up being hospitalized with dysentery. Save a prayer, indeed.
Posted by Peach on a beach at 6:36 PM No comments: 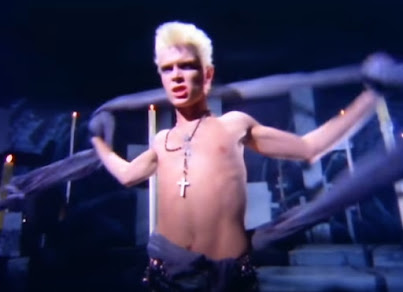 "White Wedding" by Billy Idol may not have been a 'punk' song in the purest sense.
But as a 13-year-old growing up in the safe confines of suburbia, this video is what defined the concept of "cool" to me in 1982.
A rare track we both liked, my brother and I used to emulate Billy Idol's iconic move of unwrapping his head scarf with improvised towels while singing along to the first verse.
"White Wedding" was a video with all the fixings: epic opening, ladies in leather, fist-shaking, growling, cult-like proceedings, great guitar solo, a motorcycle crashing through a church window, exploding toasters and screaming bordering on caterwauling.

Who cares what the lyrics mean, "White Wedding" is all about the delivery.
Posted by Peach on a beach at 10:12 AM No comments: 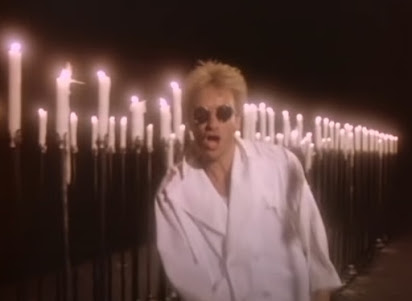 As a young teen I'd always been mesmerized by "Wrapped Around Your Finger" by The Police. I still am decades later.
So mellow, yet so hypnotic. And Sting was so damn cool bouncing amid a labyrinth of candles.
Directed by Godley and Creme, the video was shot in slow motion while Sting lip-synced in time with the music - something that required an unusual performance.
The magic of Sting's melodic and lyrical prowess, Andy Summer's sparse effective guitar and Steward Coupland's intricate drum work all reach new heights on this textured tune.
From the lighting of that first candle, the video has always entranced me.
The obscure literary references in the verses made me flip through the encyclopedias as Sting found a creative way to weave in such words as apprentice, Charibdes, Mephistopholes, tuition, fruition, and from the iconic bridge, alabaster.
And what a bridge!
It never fails to give goosebumps. Both lyrically and musically, the tune picks up the tempo when the tables are turned on the master and servant relationship dynamics in question as "You'll be wrapped around my finger". Captivating stuff.
The simple "I'll be wrapped around your finger" chorus shimmered. The synths are hauntingly beautiful.

And I'd love to chat with the folks who lit all the candles, what a job!
Those candles will burn forever in my mind, save for those that Sting knocks down at the end.
Fave lyric: "Devil and the deep blue sea behind me".
Posted by Peach on a beach at 10:31 AM No comments:

Email ThisBlogThis!Share to TwitterShare to FacebookShare to Pinterest
Labels: 1983, The Police