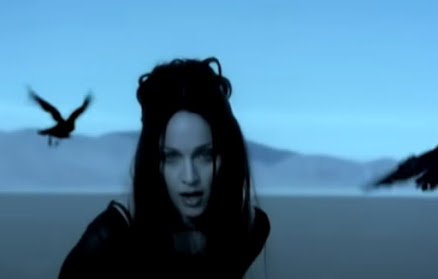 From the opening frames showing a black-haired Madonna cladded in black levitating above a bleak desert landscape, I knew the video the "Frozen" would be a good one.
The song, a mid-tempo electronica ballad, is hypnotic.
The dark imagery showcases Madonna as a Gothic, shape-sifting witch mourning a broken heart and a lost love.
The visuals are astounding, especially as Madonna transforms into a raven then later as a dog.
"Frozen" won an MTV Video Music Award in 1998 for Best Special Effects.
Posted by Peach on a beach at 6:41 PM

Email ThisBlogThis!Share to TwitterShare to FacebookShare to Pinterest
Labels: 1998, Madonna