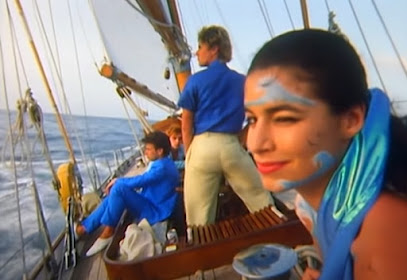 Those of us in junior high at the time will remember the playful decadence in this cutting edge video.
Some watched for the girls. Some watched for the boys. Some for both. We all came for the fantasy and breath-taking scenery.
What sometimes gets lost in the shuffle is that the fab five played the instruments and wrote the songs. "Rio" sports one of the catchiest bass lines of all time.
"Rio" hooks us in with the grandiose intro before giving way to a bouncy, maniacal John Taylor bass line and Andy Taylor's timely guitar riffs, setting up the iconic singalong chorus about the mystical Rio dancing on the sand. The song changes gears a few times, including an amazing sax climb before the last chorus.

Back to Rio: does she really exist?

According to SongFacts, Duran Duran explained on the VH1 show True Spin that Rio is a metaphor for America, and the song expressed their desire to succeed there, which they of course did.
I'd always thought LeBon said "...evidently run you down... in the lyrics during the bridge : "Hey now (wow) look at that did he nearly run you down. Before Google we experienced dozens of similar examples.

"Rio" is still a favourite at Duran concerts, and often during an extended version when Simon LeBon introduces band members to the audience. I was fortunate to have seen it played in the encore of their 2011 gig at Montreal's Bell Centre.
Posted by LP at 5:50 PM